800-Year-Old Seeds Have Grown Into A History-Altering Plant 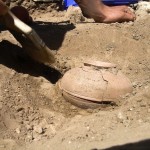 In 2008, on a dig in the First Nation’s Menominee Reservation in Wisconsin, archaeologists made a small but stunning discovery: a tiny clay pot.

Though it might not have seemed very impressive at first glimpse, this little piece of pottery was determined to be about 800 years old.

And inside that pot? Something that changes how we’re looking at extinction, preservation, and food storage, as well as how humans have influenced the planet in their time on it.

It’s amazing to think that a little clay pot buried in the ground 800 years ago would still be relevant today, but it’s true! But maybe that’s not so surprising.

After all, the choices people made in centuries past continue to affect us today, even down to which continent we live on.

And not only that, it’s actually brought an extinct species of squash that was presumed to be lost forever. Read on to discover more!
—————————————————————————————–
This pot was unearthed on the Menominee Reservation in Wisconsin, where it had laid buried for the past 800 years. It may be just a humble squash, but it’s also a symbol of First Nations’ community and history, as well as a fascinating look into how amazing plants can be. It just goes to show you that plants can be pretty incredible — and that sometimes, history has a funny way of coming back around.

If you love history, science, or you’re just curious about what this would taste like in soup, please SHARE!