28,000-Year-Old Woolly Mammoth Cells Brought Back To Life By Scientists 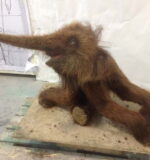 Cells from a woolly mammoth that died around 28,000 years ago have begun showing “signs of life” during a groundbreaking scientific experiment.

The young woolly mammoth was dug out of Siberian permafrost in 2011. With the species being extinct for about 4,000 years, finding such a relatively intact specimen was big news – particularly since this one was 28,000 years old.

Scientists have since been eager to find out how viable the biological materials of the uncovered mammoth still are, all those millennia later. Now researchers at Kindai University in Japan have found that its DNA is partially intact – and apparently they are well in the game to restore this huge prehistoric mammal back among the living.

If they succeed, it could look something like this (at first).

Anyway, it all comes down to the fact that the scientists at the university have managed to extract nuclei from the mammoth’s cells and transplant them into mouse oocytes – cells found in ovaries that are capable of forming an egg cell after genetic division.

After that, the cells from the 28,000-year-old specimen started to show “signs of biological activities.”

“This suggests that, despite the years that have passed, cell activity can still happen and parts of it can be recreated,” said study author Kei Miyamoto from the Department of Genetic Engineering at Kindai University.

Establishing whether the mammoth DNA could still function wasn’t an easy task. Researchers began by taking bone marrow and muscle tissue samples from the animal’s leg. These were then analyzed for the presence of undamaged nucleus-like structures, which, once found, were extracted.

Once these nuclei cells were combined with mouse oocytes, mouse proteins were added, revealing some of the mammoth cells to be perfectly capable of nuclear reconstitution. This, finally, suggested that even 28,000-year-old mammoth remains could harbor active nuclei.