20 Photos Of Nature Winning The Battle Against Civilization 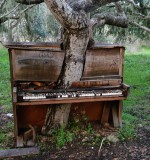 As solid and unshakable as we think our civilization is, its grip on nature is tenuous at best. If any cracks appear in the faces of our buildings or our machines, nature is quick to move in and take over. With this in mind, here are 21 photos of places and things that nature is in the process of reclaiming.

Quite a bit of thought has been given to the idea of what Earth might look like once we’re gone. Indeed, many books and TV shows on the topic have found that nature would take our places fairly quickly. Many cities would be re-colonized within a year or two, and many of our buildings would begin crumbling soon after without human maintenance or energy sources. The Life After People series on the History Channel has a comprehensive timeline of collapses detailing when various famous landmarks of human civilization throughout the world might give way to nature. Bicycle Eaten by A Tree On Vashon Island, Washington Abandoned Shopping Mall Taken Over By Fish In Bangkok