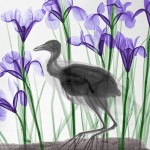 Take a regular X-ray image, invert it and add color. What do you get? Gorgeous art. Seeing nature through a different lens
Arie van ‘t Riet’s intriguing art was inspired through his work in the medical field. After a friend of his asked him to X-ray a painting — something much thinner than the human body X-rays van ‘t Riet was familiar with — he was inspired to move on to an even thinner object: flowers. Now, his photographs portray insects and even large animals. Rather than exposing living critters to the radiation, van ‘t Riet uses animals that have already died from one cause or another.

But somehow, the final compositions are vibrant with life.

The X-ray images don’t start out like the bright and colorful final products. He takes a regular X-ray image, sometimes using X-rays of different frequencies, inverts it and adds new hues.

“I add color to my images to bring back some of the surface,” van ‘t Riet said in a TEDx talk he gave in Groningen in the Netherlands. He says that he tries to combine the external surface with the inner world exposed by X-rays.