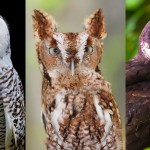 Owls have some of the most unforgettable faces in the avian kingdom. With their huge eyes and abundant feathers, owls demand our attention. These 18 species in particular have faces with expressions just begging for a caption. Owls are rather unusual in the bird kingdom. They have huge eyes that are fixed in their sockets, and feathers that help form flatter, more rounded faces than other bird species — faces that we humans can’t seem to resist. So, we’re going to indulge ourselves. Meet 18 owls with an abundance of cuteness and attitude.

Long-eared owl – Found in North America, Europe and Asia, the long-eared owl (below) takes up residence in the abandoned nests of similarly sized birds such as hawks, ravens or magpies. Barn owl – That heart-shaped face is characteristic of barn owls. This species is not only the most widespread owl species, but also one of the most widespread of any bird species. So it is no wonder that it has more than 22 other names, including ghost owl, death owl, hissing owl and delicate owl. Spectacled owl – A resident of southern Mexico, Central America and parts of South America, the spectacled owl prefers living in dense, old-growth rain forests. It preys on small mammals that are active at night, though it can take down prey larger than itself, including a three-toed sloth. Oriental bay owl – This unusual looking owl can be found throughout Southeast Asia. It is part of the barn owl family, one of two families of owl, the other being “typical” or “true” owls. Eastern screech owl – Found throughout eastern North America from Canada to Mexico, this short and stocky species has a misleading name. It doesn’t actually screech, but makes a descending tremolo call. Still, it is usually heard rather than seen. Snowy owl – Making headlines recently, these Arctic birds will sometimes visit the Eastern Seaboard of the United States. However it is primarily found in the Arctic tundra of North America, Europe and Asia. It is one of the largest owl species, and it is the heaviest. Eurasian eagle owl – Also one of the largest owl species, the Eurasian eagle owl is larger than the snowy owl, with a wingspan of 5 to 6 feet. A powerful predator, it is not a picky eater, consuming everything from small mammals to snakes and other reptiles, and even larger prey like foxes or similarly sized birds like geese and other owl species. Tawny owl – Rather than exceptional night vision, this species relies on asymmetrically placed ears, which allow it to pinpoint prey in the dark. Great horned owl – There is a reason that this is the species used as a model for statues of owls strategically placed on buildings and in yards to keep smaller birds away. Author Carol Lee points out that, “Almost any living creature that walks, crawls, flies, or swims, except the large mammals, is the great horned owl’s legitimate prey.” It is one of the most widespread and adaptable owls in the Americas. Burrowing owls – Not all owls live in trees, as the burrowing owl can attest. This species takes up residence in old ground squirrel or prairie dog burrows. Hunting at night, it can fly as well as use its long legs to sprint and capture prey.

Northern saw-whet owl – This doll-like species is a demure 6-8 inches long and is one of the smallest owls found in North America. These creatures earned their name because their call is reminiscent of a saw being sharpened on a whetstone.