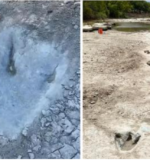 Excited dinosaur watchers are rushing to Dinosaur Valley in Texas, which was like a prehistoric highway in the early Cretaceous Period.

This summer, devastating droughts have revealed many ancient wonders, such as the Spanish Stonehenge, or the ruins of a 3400-year-old city in Iraq, and Texas is no exception. The severe lack of rain there has allowed us a rare glimpse at some 113-million-year-old dinosaur tracks preserved in stone, before they’ll soon disappear from our eyes again.

The deep footprints, complete with long claw marks, lie in the bed of the Paluxy River, which runs through Dinosaur Valley State Park about 140 kilometers southwest of Dallas. They were most likely left there by an Acrocanthosaurus, an enormous carnivore that lived in what is now North America some 113 to 110 million years ago. This genus of dinosaur could grow up to 11 meters (36 feet) in length, and its enormous size is reflected in its footprints, which can extend 30 centimeters (one foot) from heel to claw.

Jeff Davis, the park’s superintendent, said months of extremely dry weather have dried up more of the Paluxy River than usual.

“They are under mud and water most of the time. Only during extreme drought are some visible,” added Paul Baker, who grew up in the park trailing along behind his dad and has worked there as a ranger for three decades.

Baker and other volunteers led by him help clean up the tracks with whisk brooms and leaf blowers so visitors can get a good glimpse of them.

In the early Cretaceous Period, the Dinosaur Valley State Park was like a prehistoric highway. It features five main track sites featuring the footprints of both theropods (including Acrocanthosaurus and Tyrannosaurus rex) and sauropods, four-legged dinosaurs whose members are known for their long noodle necks and elephant-like tracks.

One such sauropod species is the Sauroposeidon, a gigantic herbivore that stood about 18 meters tall and weighed about 39 tons. According to Davis, the Acrocanthosaurus may have fed on the Sauroposeidon‘s young or injured. The footprints were made when the area was a shallow inland sea during the Cretaceous period, long before the time of rolling prairies in central Texas.

The tracks were first discovered in 1909 after a massive flood hit the Paluxy River, exposing the fossilized prints. At first, paleontologists only noticed the distinctive three-toed theropod prints, but later they realized the site was also home to sauropod footprints – the first distinct sauropod tracks ever found in the world.

Since then, researchers have discovered and documented many footprints in the park, but they are only occasionally visible when the river’s water levels allows them to be. Because of the current extreme drought in Texas, even more of the prints have been revealed along the riverbed than usual. But, according to Davis, rains had already began to fill in the ancient tracks, and will soon hide the secret treasures of the park once again in the mud and silt of the river.

When they will be seen again is remains unknown for now.