10 Things Our Grandparents Didn’t Do 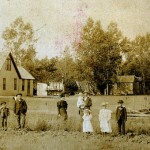 That We Do All The Time
There are things that we do today as a matter of course, meaning we do them without thinking. It is just how things are done.

Think carefully if these things have improved our lives or made things worse.

1. Use a Clothes Dryer

When I was a very small child, my grandma did not have a clothes dryer, but later, even when she did, she still hung her clothes outside on a clothes line. (sheets on the outer lines and undies on the inner lines so no one would see them) She said the dryer ran up her electric bill and the clothes didn’t smell as good.

2. Buy All Food from the Store, Year Round

Grandma never bought anything from the store that she could grow herself. She never purchased meat or poultry from the store, she butchered her own or went without. She did not take for granted as we do now, that meat must be in every meal. Sometimes meat was a luxury, and when she did not have any, she made meals without it and did not think anything about it. She also canned everything that we did not eat, so we could have food in the winter

Grandma always cooked from scratch. It was not a point of pride, or done because it was healthier, she did it because that is what you did. Spending five times as much to buy meals already prepared (and preserved with chemicals) because it’s easier was not something she would have even considered.

A rain barrel under every downspout was a must at my grandma’s house. Not only did she use the water to water the garden, she also used it to wash her hair, because her well water was hard (high mineral content) and it made her lovely silver hair turn yellow! She also used it to wash dishes because it did not leave any residue; and after washing the dishes, she used the dishwater to water the houseplants and flower beds.

5. Go Out to Eat Regularly

My grandparents almost never went out to eat. My grandpa said that food in restaurants was not as good as what he got at home. He was also cheap and did not want to pay what he called “the high dollar for food that was not worth a dime.”

People that lived in my grandparents time did not go to the movies, or concerts. They did not go to the bars on the weekends, or to Disney World. They did not go on cruises. The big money that we spend on entertainment would have horrified my grandparents. We spend more on one vacation than they needed to feed their family for a year. Free time, what small amount they had was spent outside with their family, playing games, or reading books. Even hobbies were considered a luxury, unless they contributed to the household.

7. Throw Away Things That Need Fixing or Because of Style or Because You are Tired of Them

There was a saying from long ago: use it up, wear it out, make it do, or do without. Very few things were ever thrown out in my grandma’s day. Clothing was handed down, leftovers were made into new meals, furniture was reupholstered or slip covered. People did not toss items because they were the wrong color for their living room, or the wrong style. Clothing was not thrown away because a button came off or a sleeve was frayed. As a result they bought less, spent less and were green when it was still just a color.

8. Rely on Cars to Get Around

My grandpa, bless his cheap heart, would not drive his truck unless the trip was at least 5 miles or he needed to haul something. It was two miles to the store, from his farm, so we walked. Back then, walking was a means of transportation, not what you did for physical fitness.

9. Rely on Electronics to Communicate

My grandparents knew their community. The store owners, their neighbors, church ministers, the sheriff, basically anyone that lived in the area, they knew. They did not need Facebook, they had a real community, where people talked face to face and helped one another.

10. Run to the Doctor for Every Little Pain

Grandma used a lot of home remedies for small things like ear aches, bee stings, athlete’s foot and colds. It was only if her remedies did not work (and many of them did!) that she would go to the doctor.

I’ve taken the time to think about these ten things. I believe that we have lost something important with the loss of these skills and practices. Something that we need to get back.
The world would be a much better and more healthy place is everyone were more self reliant and focused on the family. What do you think?