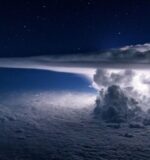 A towering thunderstorm lights up the night skies over Panama, as seen at 37,000 feet. (Photo by Santiago Borja.) A pilot of a Boeing 767 captured a stunning photograph of a thunderstorm billowing over the Pacific Ocean last month.

First Officer Santiago Borja snapped the photo from the cockpit as the plane was passing near Panama at 37,000 feet en route to South America, he told Angela Fritz with the Washington Post’s Capital Weather Gang.

“I like this photo so much because you can feel the amazing size of the storm and its power,” Borja told The Post. “But at the same time it’s wonderful how peacefully you can fly around it in still air without touching it.”

Borja told Fritz he enjoys photography and now carries his camera with him into the cockpit to combine his two passions of flying and photography.
https://www.instagram.com/p/8gxwH2lDJf/?utm_source=ig_web_copy_link

It’s a great way to get perspective of the tall storms. Sometimes the storms are so large they can be seen from space, as Astronaut Tim Peake found with this storm over Nepal, which he spotted in April from on board the International Space Station:

I’m guessing there was an impressive storm going on under that cumulonimbus cloud! https://flic.kr/p/GBkXzp The flat top in both photos is the signature anvil when the storm reaches so high, it butts up against the stratosphere and temperature begins warming with altitude, essentially providing a ceiling and the clouds then spread out along this invisible barrier.

However, the bubbles in the middle are where the updrafts are so intense, they have enough momentum to burst into the stratosphere — another sign of a very strong storm.