When You See What Happens When She Cuts This Bread, Your Jaw Will Drop! 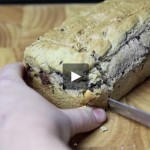 If you like bread, and if you like ice cream (which are two things I think almost everyone likes), then this recipe is going to blow your mind! It certainly surprised me!

When I heard there was something going around the internet called “ice cream bread,” I assumed it was bread that somehow tasted like ice cream. I didn’t think the two ingredients were actually just flour…and ice cream!

That’s right. Using a few cups of self-rising flour and a pint of ice cream, you can make your very own ice cream bread! It comes out with the consistency of a dense banana bread, but instead of mixing a bunch of ingredients together, you just need to mix two!

Is this something you would try? At first, the whole idea kind of freaked me out — but if I had to bring some kind of dessert for a party, I think I would try this. Imagine putting a little bit of butter on it! This is not low fat by any means, but that doesn’t mean it wouldn’t be a delicious treat that would certainly surprise everyone!