WATCH: This Man Unclogs The Toilet Using Something From The Kitchen. I Wasn’t Expecting This 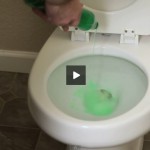 At some point in life, we all have to deal with unclogging a toilet. The typical tool that is used to do this is the plunger. According to New York University, the exact date of invention and the inventor of the plunger is unknown. New York University has purported that the plunger was most likely invented between 1850 and 1900, around the time that the suction cup was invented.

It is interesting to note that the same thing that is used to unclog toilets, has also been used by trumpet players to modify the sounds of their brass instruments. Once the stick is removed, the suction cup from the plunger transforms the sounds. Watch this video to see how this man uses an alternative to the traditional plunger to unclog his toilet.