WATCH: He Wraps A Matchstick In Foil And Sets It On Fire. What Happens Next Is Beyond Awesome 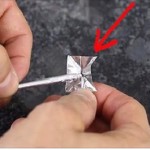 One of the biggest problems for early man was how to make fire. Some people struck rocks or steel together until they sparked or used glass to channel sunlight onto kindling, but no solution matched the match.

Early matches were invented in China. They were first sold in Chinese markets as fire inch-sticks around 1270 AD. A self-igniting match was created in Paris in 1805, and was refined and patented in England two decades later. Over the next two centuries, matches evolved into friction matches, much like the ones you see today. They are so common that some people use them as part of cool toys, like rockets. Be careful and have fun with the matchbox hack in this next video.