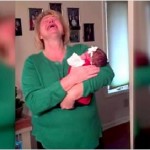 It was an ordinary day for Eva, who spent a recent Sunday afternoon in her Franklin, IN home. Suddenly, she heard a knock at the door. It was her son and daughter-in-law, who came home from Hawaii where they were both stationed. Since 2008, Miranda and Donny have been a dual Air Force family.

But Miranda and Donny didn’t arrive empty-handed. Little did Eva know, she was about to discover that not only was she a new grandmother, but she was about to meet her newly adopted granddaughter for the very first time! As it turned out, Miranda and Donny recently adopted a little girl named Melissa Faith, a.k.a Lily, after beginning the adoption process in October of 2015 . “We chose not to tell our families due to so many unknowns,” Miranda told WTHR news. “We wanted to protect our hearts and theirs. We were taking a huge leap of faith. Once the baby Lily was officially placed with us, to become our daughter, we decided that it was not the type of news to be shared over the phone.”

For nearly 10 days, Donny hid the holiday secret from his mom before they flew home to surprise her. In the video below, prepare to be delighted by Grandma Eva’s unbelievably stunned and over-the-moon reaction. It’s seriously the best.