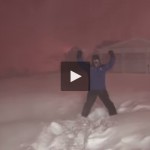 As Winter Storm Neptune bears down on the Northeast, burying areas like Boston in another foot of snow on top of the tons of snow that Winter Storm Juno already dumped on the state, the folks at The Weather Channel are reaping the rewards of a pretty amazing meteorological event that continues to unfold.

Popular meteorologist Jim Cantore has been covering the weather for The Weather Channel for the past several decades, but I’m not sure viewers have ever seen him quite as excited as he is in the below video.

While covering Winter Storm Neptune this weekend, Cantore found himself out in the elements, in the midst of the blizzard-like conditions in Boston. Already covered in snow, Cantore stands tall among the blowing drifts and frigid wind, but then something happens that he hasn’t experienced many times in person before: Thundersnow!

Yes, that’s right. Thundersnow. Not only is Thundersnow a real thing that happens, but it also apparently gets meteorologists really excited.

Seeing the lightning strike and hearing the thunder rumble during the snow storm, Cantore nearly jumps out of his enormous L.L. Bean jacket.

Cantore jumps up and down, runs around, raises his hands (in victory?), and continues to yell as he sees yet another lightning strike.

The Weather Channel continues to film as Cantore totally freaks out over every lightning strike, finally putting together a montage of the weatherman’s reaction to all six occurrences.

This is an absolutely great video. Cantore is hilarious in his excitement. That makes it incredibly entertaining. But it’s also really cool to see someone get this excited about their job, especially after doing it for as long as Cantore has. Kudos to him for still finding ways to really embrace his passion and put his all into a job well done.

How cool is that?!

Please SHARE this with all your friends and family!!