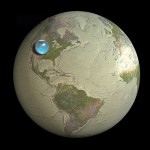 This could be where the oceans come from
The image above, which shows all of the Earth’s surface water in one place, gives you an idea of how big this new discovery is. Scientists have found, about 700 kilometers deep in the Earth’s crust, a very large reservoir that holds about three times the water volume that can be found in the ocean. The water is trapped in a type of blue rock called ringwoodite, a “high-pressure polymorph of olivine (a magnesium iron silicate) that is formed at high temperatures and pressures”. Here’s what it looks like:

Here are the main theories on the origin of water on Earth:

The cooling down of the primordial world to the point where the outgassed volatile components were held in an atmosphere of sufficient pressure for the stabilization and retention of liquid water.
Comets, trans-Neptunian objects or water-rich meteoroids (protoplanets) from the outer reaches of the main asteroid belt colliding with the Earth may have brought water to the world’s oceans. Measurements of the ratio of the hydrogen isotopes deuterium and protium point to asteroids, since similar percentage impurities in carbon-rich chondrites were found in oceanic water, whereas previous measurement of the isotopes’ concentrations in comets and trans-Neptunian objects correspond only slightly to water on the Earth.
Biochemically, during the Great Oxygenation Event, via redox reactions and photosynthesis.
Gradual leakage of water stored in hydrous minerals of the Earth’s rocks.
Photolysis: radiation can break down chemical bonds on the surface.
Planetesimals heated by the decay of aluminium. This could cause water to rise to the surface
The water may also have come from volcanism. The act of water vapor coming from volcanic eruptions then condensing and forming rain.
How can we know what’s this deep inside the Earth? It’s possible, with seismometers, to study the seismic waves created by earthquakes, and with the right algorithms, it is possible to determine what materials those waves passed through. Do that for hundreds of earthquakes from thousands of different seismometers, and you start to get a pretty good picture… Researchers only have evidence that the watery ringwoodite rock sits beneath the US. They’re now working on figuring out if it is present in other parts of the planet.

If all this water wasn’t underground, we wouldn’t be on dry land right now…