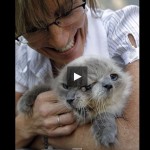 Frank and Louie, the cat with two faces, has passed away. The two-faced cat was put down last Thursday after a diagnosis of severe cancer that would not have improved with treatment.

This unusual cat wasn’t a case of conjoined twins; it is a condition known as diprosopus. Diprosopus is caused by an over-expression of the sonic hedgehog (Shh) gene that plays a role in organizing midline structures of the brain (among other things). Rather than stopping where it is supposed to, the features keep splitting, with the result of two side-by-side faces on one head.

This cat holds the Guinness World Record for longest-lived Janus cat, which is named after the Roman god with two faces. Depending on the severity of the deformity, many Janus cats do not live more than a few days. This can occur for several reasons, including being abandoned or killed by the mother, an inability to eat properly, or insurmountable brain defects. Frank and Louie was a purebred ragdoll, though the rare mutation isn’t thought to be related to breeding issues.

When Frank and Louie was one day old, it was brought to a veterinary school to be euthanized. Marty Stevens, an employee at the time, decided to adopt the cat, even though he wasn’t expected to live more than a few days. There were many challenging times ahead. One of the faces did not have a functional esophagus, so Stevens had to tube-feed the other for the first three months of life, teaching him how to eat. Though Stevens is devastated by the loss of her cat, she told the Telegram of Worcester that she would not hesitate to adopt another cat with extreme needs.