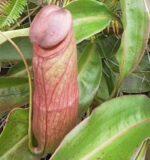 When it went viral, many commenters couldn’t believe it was a real plant. It was.

In March 2019, images of a plant dubbed ‘penis flytrap’ went viral. The name was a play on words that evokes the plant Venus flytrap (Dionaea muscipula), the name of which could, in turn, be an oblique reference to it’s resemblance to human female genitalia.

Here’s what the Venus flytrap looks like, to start with.

Now let’s go back to the phallic-looking one. The plant belongs to the Nepenthes genus and is found in the Philippines.

Though the origin of the image (see full version below) is unknown, Snopes has done a fact check and concluded that the photograph is authentic and shows the above-mentioned plant. They even asked Clinton Morse, the living plant collections manager at the University of Connecticut’s Department of Ecology and Evolutionary Biology, about the photograph, and he answered the following:

“It is certainly a Nepenthes species and certainly looks like an authentic image. … All Nepenthes have a similar passive pitfall trap that develops with a closed trap, and as the trap matures the ‘lid’ opens up. The pitchers in the attached image are just starting to open thus giving them a rather penile appearance. I’ve never heard of them being called ‘penis fly trap,’ but it is a rather accurate descriptive name.”

So, the photos most probably show Nepenthes philippinensis, a tropical pitcher plant endemic to the Philippines. It is is found on Palawan and the neighbouring Calamian Islands (including Busuanga, Coron, and Culion) and Linapacan, where it grows at 0–600 metres (2,000 ft) above sea level.

The plant plant becomes a bit less phallic-looking (as opposed to the phase that has been described as ‘penile’ by some commenters) once the pit trap is fully matured and the lid is opened. Then, the open trap fills with water to attract insects that fall into it, with the plant scavenging the nutrients in the decaying bodies, as described in a 1999 review of the genus’ carnivorous behavior.

So, if you explore and discover the mountains and of the Philippines, the chances are you will definitely recognize this plant, should you come across it – in either phase.

But you certainly wouldn’t miss this: