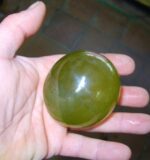 When you think about single-celled organisms, what probably comes to mind are tiny bacteria, or amoebas, which you can’t even see without a microscope. Believe it or not, this strange green ball also falls into the same category.

A good example of unicellular organisms are bacteria, which are among the most widespread single-cell organisms in the world. Even the human body is inhabited by millions of them. Not all of them are that tiny, though. In fact, the largest single, solitary cell, the Valonia ventricosa can grow as large as your palm.

Also known as ‘bubble algae’, or ‘sailor’s eyeballs’, Ventricaria ventricosa is a species of green algae that can be found in the tropical and subtropical waters of the world, such as the Caribbean, or the Indo-Pacific. These bright balls often live among coral rubble, up to a depth of 260 feet (80 meters), and can grow up to 3,5 inches (9 centimeters) in diameter.

They come in many different colors; mostly in shades of green, but silver, teal blue, or black colored ones are common as well. This depends on the quantity of chloroplasts, an organelle that conducts photosynthesis within the algae (and plants), and converts light energy into chemical energy.

Because of their unique shiny surfaces, people often mistake bubble algae for pearls or other precious gems. Usually they grow individually, but Valonia ventricosa groups are not unheard of either.

What’s really interesting, is how the Valonia ventricosa reproduces. The solitary organism of the algae multiplies through an asexual process which results in other “child” colonies. Simply put, the parent cell creates child cells in the form of new bubbles or balls, that will eventually separate from the parent cell.

The species has been at the center of many studies in the last century; there are over 2000 published scientific papers on it. This is because Valonia ventricosa cells are so large that they serve as perfect subjects to study the transfer of water and water-soluble molecules across biological membranes. The organism also has very high electrical potential relative to the water that’s around it.

That said, there’s still a lot more we don’t know about this incredible bubble algae. For example, it’s unknown how they affect corals, or other life-forms that grow around them.

Still a lot to find about this amazing creature.