This Map Shows All Of The Places Eagles Visited In One Year, And People Are Guessing Why They Stayed Clear Of The Sea 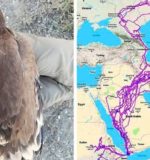 Eagles are majestic creatures – not only because of their looks (because that’d be just shallow), but they’re also admired for their intelligence and incredible predatory skills. It’s no surprise that they are symbols of entire nations and countries, appear on national emblems, coins, and works of art. If you’ve ever wondered about this grand animal’s journeys, scroll down below to read an amazing story about how one man’s unexpected finding sparked curiosity for many people.

A young man named Fahd Qash from Jizan region, Saudi Arabia found something unexpected in the swamp on his walk What he found was a dead eagle with a tracking device around its neck. Upon closer inspection, the man saw that the device had the owner’s email on it.

As it later turned out, the GPS has been fitted in Kazakhstan The tracking device has saved all the locations the eagle has been to. Turns out, scientists were doing an experiment where they attached GPS on supposedly 20 eagles and marked every single place they visited in one year. These birds have crossed many countries, but, interestingly enough, it stayed clear of the sea. These eagles have crossed many countries in the Middle East and, it is not sure why they avoided the Caspian as well as Red Sea. Researchers team called “British Birds” have tracked 16 Steppe eagles before and found out that the longest daily flight distance among all tracked eagles was approximately 355km. They have also recorded that through a complete annual cycle, an eagle spends around 31.5% in the wintering area, 41.9% in the breeding area and the rest 26.6% on migration. These statistics, as well as the map, once again prove that eagles are a constantly moving and migrating creature who travels more in their lifetimes than you could ever imagine. The article has been updated after receiving additional information about the research proving that this, in fact, is not a journey of one eagle in 20 years but a research that tracked numerous eagles in one year.