This Iraqi Lady MOCKS US Soldiers Til An Old Man Shuts Her Up With This Offer…WHOA! 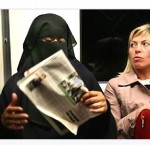 U.S. troops encounter hostility — right here at home! As a patriotic American, that’s something I struggle to believe. That is, until I read Ann Rea’s touching story about her soldier son’s experience in a grocery store. Please read and SHARE this powerful account, and remember to always thank the men and women in the U.S. Military. They deserve it.

Ann’s Story: One of my dear sons serves in the military, and I’m a very proud Mom. He is still stateside, here in California. He called me yesterday to let me know how warm and welcoming people were to him and his troops everywhere he goes. Telling me how people shake his hand, and thank him for being willing to serve and fight, not only for our own freedoms, but so that others may enjoy them as well.

But he also told me about an incident in the grocery store where he stopped yesterday, on his way home from the base. He said that ahead of several people in front of him stood a woman dressed in a burkha. He said when she got to the cashier she loudly remarked about the U.S. flag lapel pin the cashier wore on her smock.

The cashier reached up and touched the pin, and said, “Yes, I always wear it.” The woman in the burkha then asked the cashier when she was going to stop bombing her countrymen, explaining that she was Iraqi.

An older gentleman standing behind my son stepped forward, putting his arm around my son’s shoulders, and nodding towards my son, said in a calm and gentle voice to the Iraqi woman:

“Lady, hundreds of thousands of men and women like this young man have fought and died so that you could stand here, in MY country and accuse a checkout cashier of bombing your countrymen. It is my belief that, had you been this outspoken in YOUR OWN country, we wouldn’t need to be there today. But, hey! if you have now learned how to speak out so loudly and clearly, I’ll gladly pay your way back to Iraq so you can straighten out the mess you are obviously here to avoid.”

Everyone in line, and within hearing distance, cheered the older Gentleman, coming forward as they reached for their wallets. The woman in the burkha left the store in silence.

I am, like at least some folks in that store, outraged! But it also warmed my heart to know that we as Americans are speaking out, calmly and succinctly (finally) to those that enjoy the freedoms here in the US.

Hooray for Ann Rea’s son, hooray for that grocery store lady, and three cheers for the old man brave enough to stand up for our troops. Special thanks to Ann Rea for sharing this with all of us!

I’d bet money on the fact that the kindly old man served in his day! Please SHARE this powerful story about standing up for AMERICAN troops!