This Guy Places Tea Bags In His Car. The Reason? GENIUS 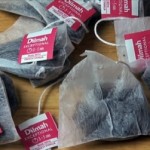 Nothing is worse than a stinky car. Odors seem to stick around longer and smell 10x worse in heated, small, enclosed spaces. Sometimes automobiles become foul smelling for a variety of reasons, such as old spilled food, kids making messes, or too much moisture trapped inside. Now there is a cheap, easy, and natural way to combat nasty smells.
According to YouTube channel OnePotChefShow, all you need to do is take a few dry tea bags and place them around the car. In no time at all the smell should disappear. It is recommended that flavored teas be used such as cinnamon or vanilla tea. The tea bags will also absorb moisture in the air, which is a common cause of stale smelling interiors. Plus, they will last for months and are a lot more affordable than any store bought air fresheners. One box should last a year or so. They also lack harsh chemicals and are much cleaner than aerosol or spray scents.
Chances are you have some tea bags in your kitchen right now, so grab a few, toss them under your car seats, relax, and enjoy the ride.