This Baby Was Born Without Eyes—But When Dad Gives Him A Piano? WOW!! 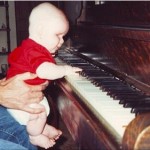 When Patrick Hughes was born, his father’s first thought was that a lot of his dreams had been dashed. Born without eyes and with limbs that could not straighten, Patrick seemed destined for a life without many of the usual father–son bonding activities that his dad had been so excited about. But, as early as his toddler years, Patrick showed his family — and the world — that he was not going to let his disability slow him down.

When he was only two years old, Patrick showed amazing promise on the piano. He learned songs by feel and memory, and by the time he was in elementary school, Patrick was playing the piano publicly. When he went to college at the University of Louisville, a teacher in the music program recommended he join the marching band. At first, Patrick and his family had no idea how that would work, but with the help of dedicated and loving father, he soon found himself on the field with the rest of the Louisville musicians.

When you see what Patrick’s father sacrifices for his son, not only will you be amazed, but you may feel the need to thank your caretakers as well. This heroic boy has a truly heroic father, and we wish both of them the best!