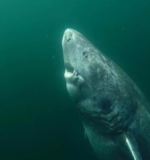 It’s hard to imagine anything still alive that was born in 1505. That was the year that Martin Luther became a monk and King Henry VIII called off his engagement with Catherine of Aragon… in short, a bloody long time ago. But that’s exactly what scientists believe they have found in the form of one massive Greenland shark swimming in the icy waters of the Arctic Ocean.

The shark is estimated to be up to 512 years old, which would make it the oldest living vertebrate in the world and even older than Shakespeare. And you thought turning 30 made you ancient. Greenland sharks have been known to live for hundreds of years and spend most of their lives swimming around looking for a mate. That’s a long time to wait.

They also grow at a rate of one centimetre a year, enabling scientists to determine their age by measuring their size.

This particular shark, one of 28 Greenland sharks to be analysed by the scientists, was measured at 18 feet in length and weighed over a tonne, meaning it could be anywhere between 272 and 512 years old.

The shark’s potential age was revealed in a study in the Science journal, according to the Sun.

If scientists have got the shark’s age right, it would have been alive during major historical events like the founding of the US, the Industrial Revolution and both World Wars. Crikey.

Greenland sharks mostly eat fish but have never actually been observed hunting. Some have even been found to have reindeer and even horse remains in their stomachs. The animal is a delicacy in Norway but its flesh is poisonous if not treated properly. Because of their longevity, academics in Norway believe that the bones and tissues of Greenland sharks may give us insight into the impact of climate change and pollution over a long period of history.

Researchers at the Arctic University of Norway are currently mapping the animal’s DNA, looking at its genes to learn more about what determines life expectancy in different species, including humans.

As many of the sharks pre-date the Industrial Revolution and large-scale commercial fishing, the sharks have even been called ‘living time capsules’ that could help shed light on how human behaviour impacts the oceans.

“The longest living vertebrate species on the planet has formed several populations in the Atlantic Ocean,” said Professor Kim Praebel at a symposium organised by the Fisheries Society of the British Isles.

“This is important to know, so we can develop appropriate conservation actions for this important species.”