They Unlock An Old Lady’s Doors After 70 Years. Inside? A JAW-DROPPING Secret… 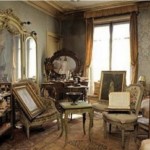 You’re about to enter an incredible, mysterious 19th century flat in Paris — one that holds the key to a shocking secret. When a man named Olivier Choppin-Janvryit finally discovered the Parisian flat in 2010, he learned it had not been seen by the outside world since the owner left it locked and shuttered in 1940.

The woman who lived in this apartment — located in Paris’ ninth district — acquired it from her grandmother and reportedly fled for the south of France as the Nazis invaded Paris in WWII. She left all her possessions there, and while she continued to pay rent for years to come, she kept the apartment locked. She never returned to Paris again.

In 2010, the woman died at the age of 91. Her heirs had her estate inventoried for liquidation.

When appraisers arrived at the apartment to catalog its contents, they found a flat full of cobwebs and smelling of dust. However, they quickly realized it was a remarkable discovery and bona fide time capsule. Inside, the appraisers marveled at the high wooden ceilings, an old wood stove and stone sink, and an exquisite dressing table. They found a stuffed ostrich and a Mickey Mouse toy dating from before the war.

The most amazing possession discovered, however, was a painting that shocked the art world and gave this story its incredible twist.

The painting was created by 19th-century Italian artist Giovanni Boldini. It displayed a delicate woman in a pink satin dress. And, with a little investigating, the appraisers connected the painting to old love letters also found within the apartment.

As it turns out, the woman in the painting was Marthe de Florian, a French actress known for her slew of famous lovers — one of whom was Boldini, to whom she was married at the time he captured her image on this canvas in 1898. Does the painting unlock the identity of the apartment’s owner? Possibly so. You see, the painting was kept private and handed down to Marthe de Florian’s granddaughter along with the Paris apartment. People speculate that the granddaughter and owner of this apartment was named Solange Beaugiron, but this has not been confirmed. The intrigue surrounding the painting led to it being auctioned off in 2010 for $3 million — a record price for Boldini’s work.

Since the press has been unable to discover the exact identity of the elderly woman, who died in 2010, the facts are still a bit unclear. Why did she continue to pay rent on this locked property for seven decades?

We may never know the full truth behind the flat, but in the meantime, we can appreciate the space for its timeless beauty and incredible mystery. Check out photos and a video of the apartment below, and please SHARE this with your friends on Facebook!
——————————————————————————————-
When appraisers arrived at the Paris flat, they were instantly surprised by what they saw. This gorgeous apartment had been locked up for 70 years. The owner, an old woman, had fled France but continued to pay rent, though she kept the place locked up.