They Found This Abandoned Castle In Ruins. Now? You’ve GOT To See Inside… 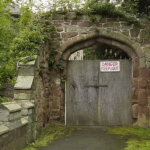 Sure, America has purple mountains majesty, but if we’re royally lacking in anything, it’s castles.

Don’t get us wrong, we have plenty of awe-inspiring structures, including a broken-down bus that got flipped into a cozy home on wheels. But we don’t have any big, fancy stone structures built in medieval times with moats, drawbridges, and dungeons filled with dragons.

The U.K., however, has plenty of of them — seemingly an abundance, at that. So, much like us Americans who get our jollies converting old banks into homes, the British are taking old crumbling castles and converting them into something that looks like it”s straight out of a modern-day fairytale.

Take, for instance, the Astley Castle. It is located in North Warwickshire, England and was built in the 12th century. It has a fascinating history that spans 900 years, including entanglements with the English crown and mysterious fires. Yet its current state, along with its most recent history, is the most thrilling aspect of it. Please SHARE this with everyone you know and offer them a slice of history while helping their imaginations soar!