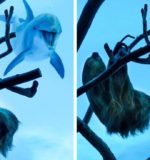 It might seem that this period of self-isolation and quarantine due to the novel coronavirus brings mostly grim news. And while that might be true for some humans, nature and animals are most likely not complaining as they get to enjoy a little bit more freedom, especially those who are usually confined to their enclosures in the zoo.

Shedd Aquarium in Chicago recently took their penguins on an adorable field trip, letting them meet the other animals living there. We also had news about orangutans in Pairi Daiza Zoo in Belgium befriending an otter family. And while that sounds like a really unlikely friendship, wait until you read about these dolphins completely losing it at the sight of a sloth!

If you ever had a competition for the unlikeliest friendship on Earth, dolphins and a sloth would definitely qualify Even though quarantine is definitely not the greatest thing that happened to us this year (yes, yes, introverts might disagree), animals living at zoos are most likely not complaining. A little break from seeing humans every day – check; tiny adorable trips around the zoo that otherwise would probably never be possible – check.

However, dolphins at the Texas Aquarium completely lost it at the sight of a sloth And while sloths may not be the most excitable animals on earth, dolphins certainly are. Maybe that’s why Texas State Aquarium decided that letting this duo meet each other was a great idea. Of course, the 3-year-old local celebrity Chico the sloth didn’t just meet dolphins on his tour around the Gulf of Mexico exhibit but their meeting was definitely the highlight of the whole adventure.

Despite the Aquarium closing its doors to humans, it seems that more doors than usual are being opened to the animals On his trip around the Aquarium, Chico the sloth also had an opportunity to briefly say hello to some ducks before moving on to meet the seahorses. He was then carried on his favorite branch to meet up with a shark and some more friendly colorful fish. Chico seemed quite interested in jellyfish but nothing could compare to the last meeting with dolphins that was waiting for him.

With their temporary closing, the sleepy sloth named Chico was treated to an eye-opening adventure through the Gulf of Mexico exhibits Turns out, the Aquarium staff frequently takes their animals on such “play dates”. “We frequently give the animals a chance to “meet” each other as a form of enrichment, which helps keep them active in body and mind. As some of our most popular animals, it seemed an obvious choice for our sloths and dolphins to get a chance to see each other while we were temporarily closed. We have another sloth, Xena, but on that day, she was more interested in sleeping than meeting the dolphins!” “Our dolphins have had the opportunity to meet several other animals over the years, including baby gators, an African serval, a red-tailed boa and others. They’re almost always very curious about the other Aquarium residents,” explained the Aquarium staff. The lucky four who got to meet Chico last week were their four male bottlenose dolphins: Shadow, Kai, Liko and Schooner.

And the results were beyond their expectations “Besides making for some fin-tastic photo ops, these animal interspecies meetups are just one of the many ways we are “closed but still caring” during the COVID-19 situation. Along with enrichment opportunities for our animals, our staff is still busy at work preparing meals for and feeding the animals, maintaining their habitats, and looking after their medical care, to name just a few tasks.”

The dolphins, generally being quite cheerful animals, were both curious and infinitely excited at the sight of a sloth “We’re striving to share as many of these stories as we can with our guests and viewers around the world to keep them engaged, educated and entertained while they’re at home. Right now we’ve had the most success through social media posts like this one, along with virtual views of our animals and daily live distance learning programs.”

Even though Chico the sloth didn’t show much emotion, we’re sure he enjoyed this adventure of a lifetime as well You can watch the video of Chico’s trip here:

As a bit of a local celebrity, Chico can't tour the Aquarium on most days without being mobbed by his adoring fans. But with our temporary closing, our sleepy sloth Chico was treated to an eye-opening adventure through our Gulf of Mexico exhibits!#ClosedButStillCaring