The toughest beef in the world! Buffalo manages to fight off an entire pride of lions in front of astonished safari tourists 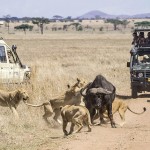 Following the pride: Lions in Tanzania spot a herd of buffalo in the distance and start walking in their direction. A safari vehicle is stationary as the predators walk past

Terrified tourists watched helplessly as a pride of deadly lions pounced on a buffalo. But during the vicious attack, the animal miraculously managed to escape.
Eleven lions targeted and attacked the buffalo in Tanzania, while 12 safari vehicles full of astonished passengers surrounded them.
Despite a relentless attempt by the predators to wrestle it to the ground, the buffalo was somehow able to break free from their grasps.
Photographer Scott MacLeod first spotted the pride while they used the shade of the 4x4s as protection from the heat. However, the group were soon on the move when they caught sight of the herd.
Describing the start of the attack, Mr MacLeod said: ‘The lions roused themselves and moved on towards a herd of buffalo in the distance. Two of the strongest females padded stealthily towards their prey as a third lion circled around behind.
‘The other lions waited, and watched. After a 20-minute standoff, the largest buffalo made a run for it and was soon caught’. Surrounded: The group of animals start chasing the buffalo as it begins its desperate struggle to get away Attack: The lions begin to maul the helpless animal while it continues its attempt to break free from their grasp Crowd: Two safari vehicles approach the scene of the attack as the buffalo tries to find an escape route. Two lions sit in the grass ready to pounce Gathering: More vehicles start to approach the fight as it moves onto a dirt road. Another lion joins in and tries to grab the buffalo’s hind legs Onlookers: A dozen vehicles end up encircling the vicious scrap. The buffalo is still surrounded by seven lions with three holding on to its legs and back Dying down: The vehicles create an arena as the fight continues. But the buffalo appears to be struggling less as some of the lions wait in the grass Safe: The attack appears to be over as the lion, standing on its own, looks away from the buffalo. Astonished tourists continue to take pictures of the scene