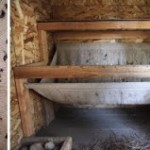 By Michelle Tullis
If you have chickens, you have a battle with poop. And if you’re getting chickens, you’ll soon find out.
I found that out last year when we bought our first mature laying hens …
The first thing they did when we got them into the kennel to take home was to lay the biggest, foulest-smelling, fist-sized poop. I thought we may have made a huge mistake; there was no way we could have eight chickens pooping that much around our property! Researching poultry health and nutrition led me to this thread on the BackYardChickens.com (BYC) forum, and that led to a friendship with the author, a wildlife biologist.

One important point I’ve learned from my wildlife biologist friend is that an accumulation of poop and feather dander in your birds’ living quarters is unhealthy. I also discovered that what and how we were feeding our chickens was unhealthy. I started our chickens on Forage Cakes and amended their layer pellets with Ultra Kibble. The result is smaller, harder, walnut-sized, low-odor poop. We got our food and water out of the coop and off the ground, and I constructed a “Poop Hammock” under their roost. The Poop Hammock is just that: A hammock hanging under the roost that collects poop. The apparatus was born from ideas gathered from email correspondence with my wildlife biologist friend. He suggested fabric tied under the roosts, preferably shade cloth.
For my Poop Hammock, you’ll first need to construct your roost. Chickens would roost high off the ground on a branch, so if your chickens aren’t too overweight, try giving them things to hop/fly up and down from (and get rid of those ridiculous ladders!). Make their roost at least a few feet off the ground. Mine has a lower bar 2 feet off the ground and the upper roost 4 feet off the ground. They roost on the higher one. I will replace the 2×4’s with perfect, straight but undulating branches … when I find them.
Once your roost is constructed (or reconstructed), measure for your fabric width, adding 2 inches (1 inch on each side) to fold and sew the edge. Measure between poles, dipping the tape about 12 inches below the lower bar and adding about 8 inches to that for the rod-pocket, depending on what type of rod you use (4″ on each end). I used 1″x2″s. The shade cloth I use is from Home Depot and cost about $30. If you’re a fancy sewer or know someone who has the ability to create side gussets, that’s what I did. They’re just side panels that hold the poop in the hammock.
I’ve had people ask me how I train the chickens to poop in the hammock. Ha, I wish! Chickens naturally put themselves to bed at dusk, and from that time until dawn (when they’re roosting), they’ll poop. The Poop Hammock just catches that poop! No poop on the floor.
Use eye-bolts screwed into the tops of the 1″x2″ s, cutting small holes in the shade cloth and burning the holes to prevent fraying. Match the eye-bolt positions to mark placement of the hooks you’ll attach to the lower edge of the roost poles.
For easy, monthly cleanup: Unhook the Poop Hammock and carry it like a burrito out to the compost. Wear a mask and if your chicken poop is like ours, when you shake it the dried poop will just CRUMBLE out! I’ll spray out any smears and occasionally use a push broom and some dish soap. It all takes less than 10 minutes. Really, no joke.

In keeping with the “keeping it clean” idea, let’s move on to food and water.
First off, get your food and water OUT of the coop! If you read the thread I spoke about on the BYC forum, you will have read about the “poultry smut” in the coop and how dangerous it is for your birds. They can breathe it in, it collects on their beaks when preening, and it can contaminate their water, which they drink! Get their water off the ground and out of the coop. Chickens need clean water, just like you do. You’re eating their eggs or their meat. Contaminated water creates unhealthy, infected birds.
We live in the mountains so we use a heated base that has a built-in thermostat that heats at freezing temperatures. The watering station is on an elevated base of river rock, and I also use river rock around the outside of the outdoor, covered run (that cuts down on dust getting in the water on windy days). I can also just hose down any poop around the waterer.

I amend the food with Ultra Kibble and have it in a feeder placed on an upside-down planter, off the ground. I placed rocks around the base, which the chickens stand on to reach the food. If any food falls to the ground, it falls between the planter and the rocks. They can reach it with their beaks, but they can’t walk through it or poop on it. I also don’t feed them anything on the ground. Chickens work for their food … If you’ve ever let them out into your garden, you see how they dig deep and wide, and then use their beaks even further, pushing the dirt out of the way to find insects and worms. There isn’t poop on it. If you just throw food out (over poop), like “scratch,” they don’t work for it. It’s just right there and yes, they will eat it, even if it’s laying on poop. That’s gross! No thanks. That’s not a “treat,” that’s a recipe for infection! If you want to give them a treat, set up a foraging table or bench and get some Forage Cakes, which will get them healthier and reduce their poop size and odor!

Some ideas on a foraging table or bench.
Get your chickens moving, the more up and down, the healthier they are. Do a quick search on the respiratory system of a chicken and you’ll see how important that is. Chickens need to move their chest with their muscles, jumping, hopping and flying up and down.

The next best thing in keeping your coop healthy, is keeping it safe!

The next best thing in keeping your coop healthy, is keeping it safe!
I used hardware cloth for my outdoor run panels and gates. I also dug 2 feet down and 2 feet out around the entire perimeter of the coop and run. The roof is corrugated PVC panels, which let light in but keep the run dry. When we’re on vacation or gone all day, I know they’re safe. We put so much money and time into raising healthy birds … what a shame it would be to lose an entire flock! Our chickens also have more outdoor foraging area that I let them utilize just about every day. I’ll cover that in another blog post in the future.