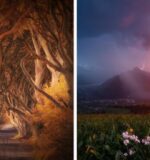 The winners of the 2020 International Photography Awards have been announced, and the nature photographs last year have shown us the scary power and incredible beauty of nature. Compete in the awards this year! The submissions are open! “You can not plan such conditions—it was pure luck because I was supposed to be shooting 2 km from the spot when this storm started. I saw the red glow above the mountain and ran to my car to reach the western side of the mountain.” One of the highlights in Northern Ireland for friends of “Game of Thrones” is the alley Bregagh Road in Antrim County. Eye contact with a humpback whale can be a powerful experience. They are intelligent, curious, social animals with unique personalities and moods. To take this photo, the artist made his dogs run together, starting at a different point so that the faster one could reach the slower one exactly on the log. It’s one shot that required a lot of preparation to understand their behavior running side by side. Dancing fog around the trees and mountains a short time before sunset. A pair of baby swans waddling up onshore and cuddling in the Lakefront Promenade of Toronto, Canada. In January 2019, Canberra had one of the most spectacular lightning storms ever. It passed the city from west to east over the black mountains and continued towards Brindabella mountains.

“This photograph is my tribute to Geoffrey Lowa. He was a friend that I never met in person. He was planning to be my host, driver, and photo model for a hybrid solar eclipse in Kenya. Sadly, he was killed just one week before I arrived. His friend Peter Nakua, who tried to save his life, is standing on a hill during 11 seconds of totality.” A beautiful Spanish stallion with the name Doncel the Aymaran. “Clouds were flowing above Mt. Fuji. The long-exposure shooting and the result of finishing with blue ink gave me an image as if I were in a different world. When I saw the finished image, I heard JAZZ.” Tateyama is one of the snowiest places in Japan. This picture was taken at the beginning of May, but it was all snow-covered. The Lone Tree of Lake Wanaka is a very famous viewpoint in New Zealand. Actually, the Lone Tree is not lonely at all. Many birds are always perched on it. A change over of the seasons, capturing the first snowfall at Moraine Lake. The African lion is one such animal that is facing a dire threat to its existence. Canned hunting, specific breeding for the “cub petting” trade, and the illicit lion bone market are genuine threats to the African lion’s continued existence.

#15 The Depths Of Winter Forest In the winter forest, an enchanting atmosphere when fog had just started to retreat a bit, revealing icy trees standing strong in icy conditions. Mesocyclone pierced by lightning under an incredible supercell in the great plains of the Tornado Alley. There are only an estimated 24 super tusk elephants left on Earth. These giants appear pulled from the pages of a bygone era, nearly out of place in today’s day and age.