That’s some heavy petting! Tourists stuck in their hatchback as amorous elephant gets frisky on South African safari 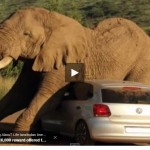 This is the moment a bull elephant on musth – when its testosterone levels can reach 60 times greater than normal – decided to get closely acquainted with a parked hatchback.
The two terrified occupants of this VW Polo found themselves in the wrong place at the wrong time as a giant elephant stooped down to rub itself against the vehicle’s roof and bonnet.
The incredible images were taken by Armand Grobler, 21, a field guide and lodge manager, in Pilanesburg National Park in South Africa. There were two people inside the car at the time the massive bull elephant started playing with it
He said: ‘I was doing ethology – the study of animal behaviour – at the time, so I had a basic understanding of what was going on.
‘The elephant was presumably on musth, which is a time that an elephant male has an excess amount of testosterone, turning even the calmest Dumbo into a raging bull.

‘Yet even though it was in this condition, it displayed no signs of aggression or frustration and was in a more playful mood.’
Elephants frequently use logs, small trees and rocks to relieve an itch or remove parasites – but with the car so close to hand, it was a chance too good to pass up.

Mr Grobler added: ‘We were unsure of what to do in the situation when the elephant made contact with the car, and when the car was being crushed, we feared for the lives of the driver and passenger but our efforts were very limited as to what we could do.
‘The all-round emotion that was within our vehicle, as we watched in horror, was that we were rushed with adrenaline yet terrified and helpless. The photos were taken by Armand Grobler, a field guide and lodge manager in Pilanesburg, South Africa
‘The two passengers in the car, male and female, both in late 20’s or early 30’s, were not harmed, only badly shaken up. They were both in shock but happy to be alive.
‘The car was not so lucky. From what we could see and hear, all the windows were smashed, the roof was badly dented and the entire top part of the car smashed.
‘All four tyres had been blown and the chassis broken.’
As for the elephant, after giving itself a good scratch, it continued on it’s way itch free – oblivious to the destruction it had left behind