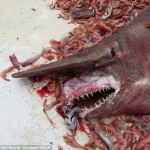 Shrimpers fishing in the Gulf of Mexico accidentally netted a prehistoric looking goblin shark that is the rarest of all sharks ever to be seen by human eyes.
The goblin shark nabbed off Key West, Florida which was 18-feet-long, pink, and has a long snout to conceal it pointy teeth from prey is the second ever of its kind to be seen in the Gulf.
The goblin shark is known to live in the deep waters of Japan and a Gulf sighting is so rare that its the first in over 10 years.
Scroll down for video This rare 18-foot pink goblin shark was caught off the Florida Keys
SF Gate reports that the goblin sighting 10-years-ago was so exciting for researchers that a scientific paper was written.
The crew of fisherman who made the latest catch had a net 2,000 feet under water and were shocked to find a massive pink shark among the shrimp they catch on a daily basis.
The prehistoric looking creature sometimes called the ‘living fossil’ thrashed on the deck and had teeth so sharp that the fishermen were too afraid to pull out the tape measure and hold it up to the mysterious creature.
‘I didn’t even know what it was,’ said fisherman Carl Moore to SF Gate.
‘I didn’t get the tape measure out because that thing’s got some wicked teeth, they could do some damage.’

nstead of keeping the shark to do research, Moore decided to snap a quick photo of the fish with his cell phone then release it back into the water.
Moore showed a photo of the shark to his grandson who was thrilled with the discovery.
‘My 3-year-old grandson, he just loves sharks so I’ve been taking pictures of every one we find, when I showed him this one he said, ‘Wow, Pappa!’ Moore said.
The shark was netted on April 19th but it wasn’t until yesterday that Moore reported his catch to the National Oceanic and Atmospheric Administration.
Based on photographs researchers guessed that the shark was a female and at least 18-feet-long.
‘This is great news,’ said John Carlson, shark connoisseur at NOAA.
‘This is only the second confirmed sighting in the Gulf, the majority of specimens are found off Japan or in the Indian Ocean and around South Africa.’

The shark, which was eventually thrown back into the water, is thought to be a female and measure out to 18 feet long
Scientists know so little about the fish that they can’t even determine how old or how big it gets.
However, scientists do know that deep underwater the color red appears black making the shark appear almost invisible to predators and prey.
Researchers also believe that the shark’s long snout is equipped with electrical sensors so that it can find prey even when it can’t see or hear anything in the depths of the water.
Perhaps the shark’s most frightening feature is its jaw which snaps out like a Venus fly trap to catch nearby fish.
Shark Blogger and University of Miami marine biologist David Schiffman didn’t even believe that finding a goblin shark in the gulf was possible.
‘At first I wasn’t sure if it was even possible for this to happen, but then when the photos came through, it is undeniably a goblin shark. It’s a shark … that’s pink!
For Moore, the shark was a catch of a lifetime and he is happy that he threw the animal back in the water.
‘That’s my ocean out there and anything in it concerns me..I know the value of trying to preserve things,’ Moore said.