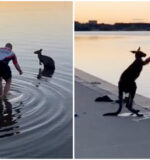 But sometimes animals have a sweet way of saying “thanks” to their rescuers, like one kangaroo who offered a hand shake to the men who saved him.

According to Daily Mail Australia, a man named David Boyd saw a kangaroo in Lake Burley Griffin in Canberra. The water was reportedly freezing, and the animal was unable to get out

But then, two brave bystanders braved the icy waters to help the roo to safety.

The men approach carefully to not startle the kangaroo. Once they get close and try to grab its arms to lead it to safety, the kangaroo starts to flail its arms.

But undeterred, the men get hold of the animal and lead it out of the water.

A third man helps lift the kangaroo onto dry land, and helps keep the scared and shivering animal calm.

While they seem gentle, kangaroos can be dangerous if they feel threatened. Their defenses include a strong punch akin to a boxer’s, sharp claws and a kick that experts say can disembowel a man.

Luckily, this kangaroo seemed to understand that these men were there to help — and in a heartwarming moment, even held out his paw as if to offer a handshake.

“Aw, he’s thanking you,” the man filming the rescue is heard saying.

According to Daily Mail Australia, the kangaroo was in “shock,” and needed a half hour to calm down.

But according to Courier Mail, onlookers said the kangaroo eventually hopped along on its way, seemingly unharmed by the ordeal.

Watch the heartwarming video below:

Thank you to these men for saving this kangaroo! You definitely deserved that “handshake” for saving the day.