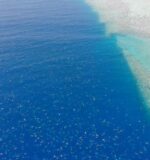 Ever seen 64,000 migrating turtles in one shot? Well, here’s your chance.

The world’s largest green turtle rookery – an estimated 64,000 endangered green turtles – have been captured migrating off the coast of Raine Island, a 32-hectare vegetated coral cay situated on the outer edges of the Great Barrier Reef off north-eastern Australia.

The breathtaking drone footage was captured in 2019 as part of the Raine Island Recovery Project, which aims at preserving the remote coral cay. Green turtle (Chelonia mydas) populations using the area to reproduce have been decreasing due to loss of habitat and overfishing, and are now listed as endangered on the IUCN Red List.

Scientists on the island are busy rebuilding nesting beaches and putting up fences to prevent turtle deaths for the 60,000+ female green turtles that come to to lay eggs here every year in one of “greatest animal migrations” on planet Earth.

Since 1984, scientists have been marking thousands of green turtles with paint – a difficult and time-consuming task – before visually counting individual animals and thus making a sound estimate of their populations on Raine Island.

“Previous population survey methods involved painting a white stripe down the green turtles’ shell when they were nesting on the beach. The paint is non-toxic and washes off in a couple of days,” explained Dr Andrew Dunstan from the Queensland Department of Environment and Science in a statement. “From a small boat, we then counted painted and non-painted turtles, but eyes are attracted much more to a turtle with a bright white stripe than an unpainted turtle, resulting in biased counts and reduced accuracy.”

In December 2019, scientists used drones to find out whether more technologically advanced strategies might be more efficient. The team then analyzed the footage in the lab frame-by-frame to count the turtles and compare the results to those from underwater Go-Pro footage. They concluded that drone use is the “most efficient survey method,” plus it’s also safer, more accurate, and makes permanent data storage possible.

Researchers also determined that surface observers “consistently reported higher proportions of marked turtles” than either the drone or the underwater method, yielding higher population estimates that may have skewed conservation efforts.

But that’s no longer the case. The Raine Island Recovery Project has already reported a 100% increase in hatchling rates as science and technology combine on the Great Barrier Reef.

Check out this other amazing video of the nesting turtles.

Raine Island, which is also home to the oldest European structure in tropical Australia, a stone beacon built in 1844, is an important environmental icon which is totally protected from public access. Let’s hope it stays that way.