Teen Loses Over 200 Pounds Without Surgery 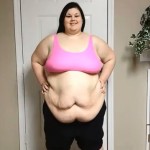 Losing weight can be a difficult task, especially when you have over 200 lbs to shed. Just ask 20-year-old Kaitlyn, who not long ago made it her mission to become healthy, and half of the size. —————————————————————————————————–
A long road of struggle
Kaitlyn Smith has been battling with her weight ever since she was a child. Just like others, she knows the overwhelming feelings of discomfort, shame, and sadness – that can go along with being heavy. While the issue had plagued her for a long time, it wasn’t until Kaitlyn hit her teenage years, that she was finally ready to do something about it. —————————————————————————————————
Sometimes you need a helping hand
At first, Kaitlyn tried to lose the weight without any help. Unfortunately though, she wasn’t getting as positive results as she would have liked. Her parents decided to seek out health coach, Kina Wald, to help their daughter reach her goal. It turned out to be the best decision that anyone could have ever made… —————————————————————————————————-
Determination is what it took
Through her coach’s advisement, Kaitlyn began eating healthy and working out. Although it was difficult at times, she never gave up. The teen powered through each and every task, determined to lose the weight. And was it working? Oh, yes! ———————————————————————————————–
A blessing no one expected
In order to have a skin removal procedure, it was going to be quite costly for the teen. So, in order to raise enough money, Kaitlyn set up a GoFundMe page. This is when Dr. Michael Salzhauer stepped in – a Miami Surgeon who offered to complete the operation for her, free-of-charge. Kaitlyn could not have been more grateful… ————————————————————————————————-
It was a life she had always dreamed about
After Kaitlyn healed from the skin removal operation, she finally had a body that she was proud to be in. No longer did she feel ashamed or out of place, she felt beautiful.
“I had to learn to love myself again, and I’m more confident now.”
This once unhappy teen has enjoyed documenting her slim new figure – something that she never would have done before. ———————————————————————————————————–
Now it was her turn to lend a helping hand
Kaitlyn has decided to share her story on her own fitness webpage, in the hopes of motivating more people to become healthy. Along with detailing her experiences, she also encourages others to not be embarrassed by their weight struggles, and to love themselves for who they are.