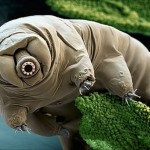 In 2007, a little known creature called a tardigrade became the first animal to survive exposure to space.

It prevailed over sub-zero temperatures, unrelenting solar winds and an oxygen-deprived space vacuum.

On Monday, this microscopic cosmonaut has once again hitched a ride into space on the Nasa shuttle Endeavour.

Its mission: to help scientists understand more about how this so-called “hardiest animal on Earth” can survive for short periods off it.

Tardigrades join other microscopic organisms selected to be part of a project into extreme survival.

Project Biokis is sponsored by the Italian Space Agency and will investigate the impact of short-duration spaceflight on a number of microscopic organisms.

The project will use seven experiments to investigate how spaceflight affects organisms on a molecular level.

The team will be using molecular biology to evaluate any changes in the organisms’ genetic information, as well as investigating how cells physically adapt to cope with extreme dehydration, caused by the space vacuum, and damage caused by cosmic radiation.

One of these experiments, the Tardkiss experiment, will expose colonies of tardigrade to different levels of ionising radiation, determined using an instrument called a dosimeter, at different points during the spaceflight mission.

The results from Tardkiss will enable researchers to determine how radiation dosage effects the way cells work.

Tardigrades are of particular interest following the 2007 European Space Agency (Esa) Foton-M3 mission, during which their ability to survive space conditions was discovered. Endeavour climbs into the sky on Monday

Their stocky bodies and gait have all the hallmarks of a bear. But this isn’t a typical bear encounter.

These bears are less than 1mm long and are found in the sea, in fresh water and on land.

Genetic studies have shown that they originally lived in freshwater environments before adapting to colonise the land, seeking out moist habitats such as soil, mosses, leaf litter and lichen.

Tardigrades earned the “hardiest animal on earth” tag having evolved elaborate dormancy strategies that allow them to shut down all but the essential biological processes when conditions are not conducive to supporting life. Professor Roberto Guidetti from the University of Modena and Reggio Emilia believes their ability to suspend life and withstand freezing and desiccation may explain why they can survive in space.

“Tardigrades can be found all over the world from the Arctic to the Antarctic, from high mountains to deserts, in urban areas and backyard gardens,” he explained.

“In terrestrial environments, they always require at least a film of water surrounding their bodies to perform activities necessary for life.”

But if these conditions change, tardigrades are capable of entering an extreme form of resting called cryptobiosis.

“The physiology and biochemistry of anhydrobiosis is bound to a complex system that involves many different molecular components working together as bioprotectants.”

Sugars and heat stress proteins, which are expressed when cells become stressed, act as “molecular chaperones” protecting important molecules within the cell.

The disaccharide sugar called trehalose plays a role in the protection of cells and biomolecules from dehydration by replacing water that is normally bonded to hydrogen.

During dehydration, loss of water increases the ionic concentration leading to the formation of reactive oxygen species (ROS) which damage important biomolecules including DNA. To counter this attack, organisms produce antioxidants that can mop up ROS minimising cell damage.

The regulation of antioxidant metabolism represents a crucial strategy to avoid damage during dehydration.

“Tardigrades can persist for months, or even for years, in the anhydrobiotic state. When in the desiccated state, tardigrades show a high resistance to physical and chemical extremes,” explains Professor Guidetti.

“For example, very low and high temperatures, exposure to high pressure or vacuum, as well as contact with organic solvents and ionising radiation.”

Exposure to the conditions found in space induces rapid changes in living systems.

The TARDKISS study may help researchers such as Professor Guidetti develop techniques to protect other organisms, including humans, from the extreme stresses found under space conditions.

It may also help with the future long-term goal of extending the exploration of the Solar System.