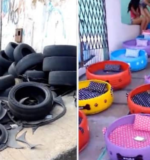 Amarildo Silva is repurposing old, used car tires into classy animal beds for the thousands of strays running through the streets of his hometown.

Silva lives in the city of Campina Grande, Brazil, where stray animals outnumber homeless people by over 500%!

The compassionate young artist, who is only 23-years-old, has decided that it’s in his power to make a positive change for not just these animals, but his city streets as well. Just two short years ago, Silva was working a job at a supermarket store like many other kids his age.
One thing that sets Silva apart, though, is that he never gave up on his dream of being self-employed.

As Silva was trying to come up with a way to use his creativity as an artist and his love for repurposing discarded materials, he noticed something about the stray dogs in his town; they all like to curl up for the night in thrown out, used tires.

The light went off in Silva’s artistic mind and he got to work collecting hordes of unwanted tires from his city’s streets, parking lots, and landfills. Amarildo knew that the very best possible outcome for him in terms of an entrepreneurial lifestyle would be to find a way to make a living doing what he loves.

By upcycling used tires into fabulously ornate pet beds, the young Brazilian found a way to marry several of his passions together and incorporate them into his business.

Not only was he providing much-needed aid to the homeless dogs and cats surrounding him (something he’s always sought to do), but he is also helping people and the environment by substantially reducing waste.

Tires can take the better part of a century to decompose if not recycled. Once Silva had compiled enough tires, he started honing his craftsmanship as he slowly transformed the discarded tires into small rubber sanctuaries for both pets and homeless animals alike.
He begins by cutting the tires down into the desired shapes and pieces and gives them a very thorough scrubbing.

Then he adds fresh paint to seal and decorate the pet bed in progress, adding in special touches of bone, paw, and heart shapes, and even adds the name of the pet it’s going to if the information is available, but he doesn’t stop there. After Silva has the basic structure of the bed all painted and decorated, he sews beautifully printed fabric around nice, soft cushions to make a comfy base for the bed inside the tire, then sews the remaining fabric into a matching pillow to tie the whole bed together.
The end result is a stunning, luxurious bed fit for even the most spoiled of pups and purrers!

After the budding businessman mastered his craft, he sold his first six upcycled pet beds to his coworkers at the grocery store, kickstarting what has become both a lucrative and life-changing business model. Once Silva’s pet bed creations started gaining attention from the local community for the massively positive impact he was having on the environment, as well as in the lives of homeless pets, he started receiving invites to demonstrate his work at schools and local events.

Now Silva, in addition to creating the business he’s always dreamed of, is also educating people in his region on the importance of sustainability, and how even just one person with a simple idea can have a powerful impact on the world around them.

The once-struggling young artist has seen his business grow at a lightning-fast pace in just the last two years, allowing him to branch out with his business ideas even further. After it became apparent to Silva that his idea of creating a business by turning used tires into sustainable, lasting pet beds was taking on a life of its own, he decided to make it official.

He now runs Cãominhas Pets as a full-time business and has social media pages on both Facebook and Instagram.

In addition to crafting pet beds from the used tires he collects, Silva has branched out even further by fashioning the unwanted mounds of rubber into large, colorful planters, livening up his community’s gardens one sale at a time.
It didn’t take long for other ideas to start planting themselves in Silva’s creative mind, either. The earth-friendly, compassionate entrepreneur began taking his environmental impact a step further by fashioning some of his used tire collection into nifty, brilliantly colored, and durable recycling containers.

Each container is painted in a different color with the name of each major waste group clearly painted on each corresponding container.
He couldn’t make it any easier for passersby to properly dispose of their items if he tried!

After having his own eyes opened to how much garbage could be saved from the oceans and landfills by repurposing the long-lasting rubber tires into something useful, Silva expanded his product line even further to include smart, sustainable furniture! There seems to be no end to Silva’s inspiration as an artist and environmentalist.

It didn’t take long for people to notice the huge amount of waste that Silva was diverting away from the streets and landfills, and people began reaching out to him about it.

“Over the course of two years, I already removed 1,500 units of old tires from the environment making only the [pet beds]. This certainly makes a very big positive impact on nature.” Indeed it does, as the Brazilian artist and environmental steward points out that, coupled with all of the other items he’s made from the tires, the number of tire units saved from the trash grows to about 6,000!

Silva has even started including holiday decorations to his repertoire of rubbery gems, turning trash into eye-catching, festival-worthy creations that make people smile and inspire them to rethink the way they look at their garbage!
Among the many things this 23-year-old artist has accomplished, one of the greatest is proving that having compassion can take you far in life, no matter where you’re starting out.

You can see some of Silva’s work in action in the video below to get a glimpse at the inspiration that the good folks in the city of Campina Grande, Brazil are feeding off of, and maybe get a little DIY inspired yourself!