‘Somersault Spider’ Backsprings Through the Desert 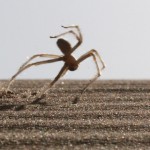 A newly discovered spider has just entered the animal record books by becoming the only known somersaulting spider.

The new species, Cebrennus rechenbergi, is described in the latest issue of the journal Zootaxa. It’s a nocturnal spider that lives in the Erg Chebbi desert of southeastern Morocco.

Bug Photos to Haunt Your Dreams

While somersaulting, the spider moves over 6.5 feet per second, according to a press release issued by the Senckenberg Natural History Museum in Frankfurt. In Germany, the arachnid is known as the “flic-flac spider.” Flic-flac, aka flip-flop in English, also is a term referring to back handsprings.

The spider spends most of its time living in a custom-made home crafted out of sand and silk, according to the study, which was led by spider expert Peter Jäger. The cozy domicile is tube-shaped and sits beneath the desert surface, thereby protecting the spider from the sun and predators.

The spider has to leave to hunt and for other reasons. When it does, somersaulting can permit a speedy getaway should a predator try to pounce. Threats to the spider include scorpions, other spiders like the camel spider, and even humans.

The spider moves faster by somersaulting than it would if it were running. There is less friction to contend with and the vaulting motion creates its own momentum.

The spider is such a good athlete that it can do backsprings both up and down tall sand dunes.

As you might imagine, all of this can be exhausting and uses up a lot of energy, so the spiders can keel over if they have to do a somersault escape anywhere between 5 and 10 times a day.

Even with that limitation, scientist Ingo Rechenberg of the Technical University of Berlin was so impressed by the spider’s gymnastics that he built a tiny robot, called The Tabbot, mimicking the agile spider’s moves. “Tabacha” means “spider” in the Berber language.

“This robot may be employed in agriculture, on the ocean floor or even on Mars,” Rechenberg said.

Jäger hopes to find more unique species in future. As he said, “It is our goal to record and preserve the diversity of all life on our planet.”