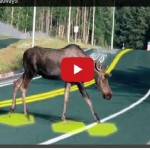 Solar Roadways is a modular paving system of solar panels that can withstand the heaviest of trucks (250,000 pounds). These Solar Road Panels can be installed on roads, parking lots, driveways, sidewalks, bike paths, playgrounds… literally any surface under the sun. They pay for themselves primarily through the generation of electricity, which can power homes and businesses connected via driveways and parking lots. A nationwide system could produce more clean renewable energy than a country uses as a whole (http://solarroadways.com/numbers.shtml). They have many other features as well, including: heating elements to stay snow/ice free, LEDs to make road lines and signage, and attached Cable Corridor to store and treat stormwater and provide a “home” for power and data cables. EVs will be able to charge with energy from the sun (instead of fossil fuels) from parking lots and driveways and after a roadway system is in place, mutual induction technology will allow for charging while driving. ” class=”alignnone size-large wp-image-1130″ />
Did you know:
Solar Roadways has received two phases of funding from the U.S. Federal Highway Administration for research and development of a paving system that will pay for itself over its lifespan. We are about to wrap up our Phase II contract (to build a prototype parking lot) and now need to raise funding for production.

Our glass surface has been tested for traction, load testing, and impact resistance testing in civil engineering laboratories around the country, and exceeded all requirements.
Solar Roadways is a modular system that will modernize our aging infrastructure with an intelligent system that can become the new Smart Grid. We won the Community Award of $50,000 by getting the most votes in GE’s Ecomagination Challenge for “Powering the Grid” in 2010. We had the most votes again in their 2011 Ecomagination Challenge for “Powering the Home”.
On August 21, 2013, Solar Roadways was selected by their peers as a Finalist in the World Technology Award For Energy, presented in association with TIME, Fortune, CNN, and Science.

Solar Roadways was chosen by Google to be one of their Moonshots in May of 2013.
Solar Roadways was chosen as a finalist in the IEEE Ace Awards in 2009 and 2010.
Solar Roadways has given presentations around the country including: TEDx Sacramento, Google’s Solve for X at Google’s NYC Headquarters, NASA, Keynote Speaker for the International Parking Institute’s Conference and much more…
Solar Roadways is tackling more than solar energy: The FHWA tasked us with addressing the problem of stormwater. Currently, over 50% of the pollution in U.S. waterways comes from stormwater. We have created a section in our Cable Corridors for storing, treating, and moving stormwater.
The implementation of our concept on a grand scale could create thousands of jobs in the U.S. and around the world. It could allow us all the ability to manufacture our way out of our current economic crisis.