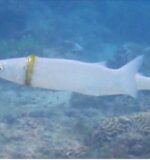 A snorkeler in Australia hardly believed her eyes when she spotted a sand mullet fish with a wedding band wrapped around its neck.

Norfolk Island local Susan Prior was swimming off the east coast of Australia when she beheld the strange site. Believing the ring might be of value, Prior put it up on the local Classifieds page in the hope she would find the owner, Newsweek reported.

“I recalled that someone had posted on our local community social media pages about a large man’s wedding ring that had gone missing in the bay earlier this year, so I decided to see if I could find the possible owner,” Prior said. “It didn’t take long for my suspicion to be confirmed; we now have a poor mullet weighed down with someone’s (expensive) gold wedding ring.”

Shortly afterwards, she found out that the ring belonged to Nathan Reeves, who had lost it while swimming at Emily Bay with his wife during Christmas. The couple were searching high and low for the missing ring.

Prior told Newsweek that the piece of jewelry had most probably become lodged around the fish’s body while it was snuffling through the sandy ocean floor for food, which is what sand mullets usually do. The ring was probably lying in the sand and just flipped over the fish’s head and lodged there, she added.

Prior is now trying to catch the fish in a net, which would allow her to gently remove the ring and finally hand it over to the relieved couple.

“It is very skittish and keeps on the edge of the school,” she explained. “We need to get quite a few of us in there to corral it and then use a throw net to try and catch it. It really is going to be difficult.”

Prior said she often comes across fish caught in plastic rings from discarded juice and milk bottles but this was the first time she saw one wearing such an expensive circlet.

“Most of the rings that get caught by these fish are the plastic ones that go around the tops of juice and other liquids that come in plastic bottles,” she wrote on NorfolkIslandReef.com.au, a site she has launched to document the marine life in the region and call attention to the importance of keeping the ocean clean.

The story is quickly travelling around the world, but “it is a shame there isn’t more fuss when these rings are plastic,” Prior wrote on the website. “Sadly, those of us who swim regularly see this far too often.”

Of course, Reeves and his wife can’t wait for the ring to be retrieved, so they could return to Norfolk Island to fetch it.