She Put A Long PVC Pipe Up On Her Wall And Grabbed The Spray Paint! The Result? GORGEOUS! 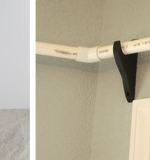 She keeps PVC pipes on her wall above the windows and the reason why is genius!

No matter what you’re trying to update, there’s always a way to make it an affordable version!

That’s what Shelley Detton from the blog, 7 Layer Studio, discovered when she decided to redo her office on an small budget.

Sometimes, the most expensive furnishings are the ones you don’t expect to be.

“I didn’t want to spend a fortune on these walls, and I wanted the drapes to completely cover the space between the windows,” Shelley wrote on her blog post about the project.

So, she came up with a solution to use PVC pipes instead of rods!

“I knew I could get away with the 45 angle PVC couplers and the super cheap curtain rod brackets,” she wrote.

The rods needed to be long enough to cover the wall, which had two angles on it. Once she had them ready to go, Shelley decided to spray paint the PVC pipes black to make them look more curtain ready and less like a plumbing supply.

“I painted the pipes black with spray paint that’s especially designed for plastic, and I only had to buy two unfinished finials for either end of the curtain rods,” Shelley wrote.

Once the paint had dried, Shelley installed finials.

“I sprayed some of that expandable caulk sealant stuff into the open ends of the PVC, then taped the finials in place on the end before the foam had a chance to expand out the end,” she wrote.

When it had dried, and the pipes were connected, the only step left was to hang the ends of the rods up on the wall and rest the PVC pipe on top of it.

With some polka dot curtains in place, the project was finished! Up on the wall, no one would ever be able to tell that to so called “curtain rods” are in reality PVC pipes!