She Gave This Old $5 Dresser A Stunning 1960s Makeover 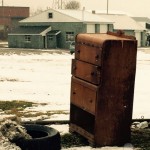 I absolutely love when a DIY project takes someone else’s trash and turns it into a beautiful new treasure.

Larissa from the DIY blog Prodigal Pieces found a double waterfall Art Deco dresser at a friend’s garage sale, old and broken with knobs missing and the veneer peeling off.

Because her friend thought it was just useless junk, she was selling it for only $5 — and Larissa saw the potential for a great DIY project.

Just like the time she turned an old desk into a beautiful French vanity, Larissa proves that with a little bit of love and a lot of vision, an old piece of furniture can become something truly stunning!

Isn’t it great when you are able to make something special out of something that was considered junk? Larissa plans to auction off her adorable little dresser — “BEEP,” as she’s affectionately nicknamed it. All proceeds will be going to Samaritan’s Purse, an international relief fund.

Be sure to check out Larissa’s other wonderful DIY projects on her blog, Prodigal Pieces.

Please SHARE if you love turning trash into treasure!