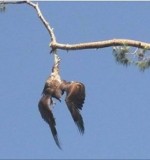 Jason Galvin and his neighbors recently spotted a helpless eagle hanging from a tree in their Minnesota town, 70 feet in the air. At first, Jason thought the bird was surely dead — but when he zoomed in on his binoculars, he realized the eagle was still breathing.

The neighbors called the police, the fire department, the DNR… no one would help. But instead of leaving the bird to die up there all alone, Jason’s wife begged him to grab his rifle and try to shoot at the rope until the eagle was released. She knew he was a good shot, and that’s because Jason is an army veteran who served two tours in Afghanistan.

Jason agreed to the nearly impossible feat. He got approval from the DNR, took out his .22 long rifle, and started shooting at the rope and branch tied to the eagle’s fragile leg — all the while, trying not to hit the bird. Never did he think his military experience would come in hand for something like this.

Watch the video below to find out what happened next, and please SHARE this incredible tale with your friends on Facebook!