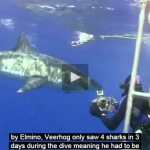 AN AUDACIOUS photographer braved a bloody end when he posed for a picture with a great white SHARK. Dutch conservationist Peter Verhoog, who could be considered either reckless or brave, stuck his head out of a cage to capture himself with the toothy animal in Guadeloupe, Mexico. The diver insisted he was in no danger from the underwater predator.