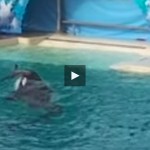 I was at SeaWorld San Diego on the 20th Feb 08 and attended the Shamu Killer Whale “Believe” show. During this show, Shamu lived up to his Killer Whale name.
During the show a Pelican landed on the water. This proved to be a big mistake for this unfortunate bird. To capture this video I guess I was in the right place at the right time…I wish I could say the same for the Pelican.
Suddenly out of nowhere one of the whales lunged at it from underneath the water, caught it in it’s jaws, and dragged the bird under the water, thus drowning it. The other whales in the pool, with the exception of the whale that was at the front of the pool with a girl from the audience, all disappeared under the water ignoring their trainers.
You can clearly see the trainer in the forground use the intercom to tell the others to get the Pelican off the water or to distract the whales from going near it. Obviously this didn’t work. As the whale gets the Pelican, you can see the trainer in the foreground put his hands to his head and yell at the trainers on the main stage. He then pushes the girl from the audience back away from the water and clear of any danger.
At this point the show’s music was still blaring out of the speakers, but it was obvious to the audience the show had not gone as planned. Some of the trainers tried to continue on as if nothing had happened and continued the dance moves. Meanwhile the whales still hadn’t surfaced and had their catch at the bottom of the pool. Eventually one whale did surface, as did the limp body of the pelican. The whales then pushed it around the surface for a while and then tore it apart in front of the audience.
Eventually the trainers got back the attention of the whales and managed to lure them backstage to the holding pen, leaving bits of pelican floating around in the pool. Once the trainers had the whales securely locked up, they then went about retrieving the Pelican parts from the pool. Since the show had been cut short, the bewildered audience responded with clapping and cheering as each part of the Pelican was retrieved from the pool.
Upon leaving the pool and entering the back stage viewing area, I was amazed to see the behaviour of one of the whales who was regurgitating either parts of the recently killed pelican, or maybe it was fish, and it was feeding them to a group of birds near the pool. It almost seemed like it was trying to lure the birds closer and grab one of them. The trainers witnessed this too, and given what had just happened during the show, they distracted the whales from this area and held them at the other end of the pool until the audience had left the area.
I guess what the audience witnessed during this show is that even though these animals appear to be domesticated in captivity, they are still wild animals and their “Killer Whale” instincts are still in tact. Having witnessed what I did, there is no way I’d get in the pool with them.
Youtube will only let me upload 10 minutes of this footage but I have heaps more. Unfortunately the video as presented here on Youtube is very grainy. The origanal footage is much clearer as it was shot in High Definition and in 16:9 Wide Screen.