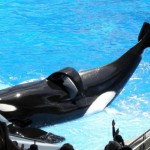 photo credit: Milan Boers. Tilikum, the orca that has fathered many of SeaWorld’s stars may also be the reason its profits are falling over

SeaWorld profits are, er, tanking and the company has blamed the bad publicity from the documentary Blackfish. SeaWorld denies it is mistreating its stars, but is still planning to build bigger and better enclosures for the orcas in the hope of turning the tide of public opinion.

The problems for SeaWorld started in 1991 when three orcas killed Keltie Byrne, a marine biology student who fell into their pool while working as a part time trainer at Sealand. After one of the orcas, Tilikum, was moved to Seaworld Orlando, he killed two more people. Tilikum is a wild-born orca, captured off the coast of Iceland in 1983 when he was approximately 2 years old.

In 2013 the film Blackfish was released, covering the deaths and arguing that the combination of confinement and the tricks they are trained to perform has a damaging effect on the cetaceans’ psychology. It has since been demonstrated that orcas can live more than 100 years in the wild, while usually surviving only a fraction of that in captivity.

There has been considerable back and forth over the accuracy of the film’s claims, but also a considerable backlash from the public. While the company blamed an initial slump in profits on bad weather, that explanation has worn thin over a year.

The Huffington Post reports that SeaWorld is now projecting a 6-7% fall in revenue for the year, and has said the film contributed. SeaWorld shares are down 35% this year.