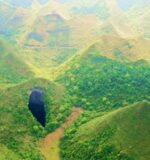 Chinese scientists have discovered an ancient lost world in an extraordinarily deep and large sinkhole in south China, where they expect to find flora and fauna still unknown to science.

The giant sinkhole was found near Ping’e village in the Leye district of Guangxi, China, Ancient Origins reports. The newly discovered underground world is estimated to be 192 meters deep, 306 meters long and 150 meters wide.

This unusual terrain type is created by groundwater flowing through soluble layers and carbonate rocks such as gypsum and limestone. The Chinese sometimes refer to these structures as ‘heavenly pits’, and it is easy to see why.

The newly discovered sinkhole is one of the largest in the world.

While most other sinkholes in the world are filled with water (especially in Mexico, the “Sinkhole Paradise”), this newly discovered place in China is a verdant oasis with trees reaching up to 40 meters (about 130 feet) in height.

And, according to researcher Chen Lixin, the expedition leader, “there are species in this cave that have never been reported or described to science”.

Another team member, Zhang Yuanhai, a senior engineer from the Karst Institute of Geology, added that at the bottom of the sinkhole they encountered an ‘another world’.

Now, many scientists around the world are eagerly awaiting data on any potential newly discovered species. This includes Chinese botanists, who are spearheading the country’s efforts to combat desertification by planting trees. In the past, they often ran into trouble because the selected plants used up too much water. However, new plants – oh sorry, old plants – growing in these incredible places could indeed make a difference in this regard.