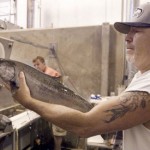 While hydroelectric dams are able to generate electricity without coal or oil, they act as obstacles for wildlife, and migrating salmon in particular. When salmon are ready to reproduce, they migrate from the sea back upstream into rivers, where they spawn on gravel beds. Swimming upstream requires the ability to fight against obstacles including rapids and up over drop-offs. Traditional ladders for fish involve jumping through a series of pools, which step up progressively, allowing the salmon to climb over the dam. Unfortunately, at a certain point, some dams are too high and ladders aren’t a practical solution. However, the aptly-named company Whooshh Innovations was inspired to solve this problem by looking at their own existing technology used to transport delicate produce, like ripe tomatoes or apples, without damage using vacuum pressure. They were able adapt their system to safely give fish a boost, and thus, the salmon cannon was born.

“So we put a tilapia in the fruit tube,” Whooshh’s VP Todd Deligan, told the Verge in an interview. “It went flying, and we were like, ‘Huh, check that out.'”

It took a few years to tweak the design, but Whooshh has developed a system that allows salmon and trout to conveniently load themselves into the device. Vacuum pressure then gives the fish a boost, speeding them 24-35 km/h (15-22 mph) along a track that is misted in order to keep them wet throughout the journey.

So far, the testing of the tube system has only been used on frozen fish. The Verge reports that the Department of Energy will be overseeing a test of the system next month, and when fish start to appear for to spawn, the Washington Department of Fish and Wildlife will monitor how the fish fare when shot through a track that is 45 m (150 ft) long over a 6 m (20 ft) embankment.

While the notion of a “salmon cannon” does sound a bit extreme on the surface, this could actually be the most delicate way to return them to the migration path, as opposed to capturing them and moving them via truck or helicopter as some departments do. We’ll be watching as testing and implementation of Whooshh’s technology progress for our fishy friends!

Ready to see how the system actually works? Check it out here: