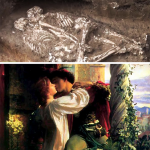 Romeo and Juliet of the Bronze Age: two in Russia are embracing human skeletons
The work of a team of Russian archaeologists had an unexpected finding: during excavations in the Russian region of Rostov, were two skeletons from the Bronze Age embraced each other perfectly. Correspond to two adults who were so carefully stationed to stay with their arms and legs intertwined, facing each other.
Near these remains was also discovered the tomb of a young child, according to the Itar-Tass news agency. “I never can find anything like this. Normally, joint graves the remains of the woman found lying behind a man, and behind her a child, but it embraced, hands and feet intertwined, never had seen.’s the ‘Romeo and Juliet’ from the Bronze Age, “one of the archaeologists, the find participant.
Experts let it be known that the age of the fossils found is estimated to be about 4000 years, although able to accurately determine both the age and sex of those buried, their skeletons should be subjected to detailed analysis.