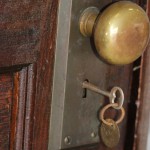 In 1939, a Parisian apartment was locked up and abandoned. Seventy years later, an auctioneer stumbled into a mysterious glimpse of the past and a multi-million dollar work of art. Leaving her lavish apartment must have been disheartening for 23-year-old Madame de Florian. It was the beginning of World War II, and she probably received word that the German soldiers were marching toward Paris. She packed quickly, locked her Parisian apartment, and headed south to the free zone and safety. Though she continued to pay rent for the rest of her life, this lovely lady would never return to her glamorous apartment again. She died in 2010, at the age of 91.
It was after Madame de Florian’s death that her heirs first learned of the apartment. They hired Olivier Choppin-Janvry, an auctioneer, to inventory the apartment’s furnishings. Considering the years that had passed since the last time the apartment was occupied, Olivier and his team probably experienced some apprehension as the last bolt was unlocked, and they entered. The opening of the door must have taken the auctioneer’s breath away. The apartment was a frozen moment in time, during the World War II era. The smell of dust was in the air, with cobwebs throughout.
The furnishings displayed treasures from the early 1900’s. The dining area was still fully supplied with dishes, glassware, and other dining essentials. Works of art had been removed from the walls, as if they were being prepared for transport with the owner running short of time. This intricately designed, ornate vanity table still contained brushes, makeup and perfume bottles, appearing as if it were still waiting for the return of its elegant owner. In a corner, original Micky Mouse and Porky Pig dolls were reflective of that historical period. Walt Disney would be pleased. The most shocking and intriguing discovery was a painting of a beautiful woman in a pink evening gown. Further investigation revealed that the woman in the painting was the apartment’s previous occupant, Marthe de Florian, who just so happened to be Madame de Florian’s grandmother. The artist was not immediately known. A later discovery concluded the work was painted by a well-known Italian painter from the Belle Epoque period — Giovanni Boldini. Marthe de Florian was a well-known Parisian actress, living a very lavish lifestyle as a “high-society” girl in the 1880’s. A collection of love letters, tied with various colored ribbons, was found in the apartment and evidence of her many famous suitors, including several Prime Ministers and Presidents of France.
Besides Marthe being the subject of Giovanni’s painting, one of the love letters provided evidence that she was also the subject of his affection. This provocative work of art was painted in 1888, when Marthe was 24. After its discovery in 2010, it was auctioned for $3.4 million – the most valuable painting of any of Giovanni’s works.
To see more of this elaborate apartment, watch the video below, and take a journey into the past.

The disarray left in the apartment was understandable – especially with the circumstances of WWII probably being the cause of Madame de Florian’s hasty departure. However, predominate questions remain. Why would she choose to never return? And, why would she methodically continue to pay rent for the next seventy years? Opening such a treasure chest of collectibles after such a lengthy time had passed must have been quite an experience. Hopefully, the family will release more information someday, but until then the answers for the rest of the story will remain a mystery.