Powdered Alcohol Coming To The US 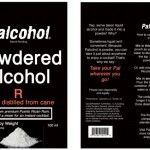 Talk about a powder keg.

Palcohol may soon be at a liquor store near you. The product was recently approved for consumption by the Federal Government, which means society could well be on its way to snorting itself into oblivion. But that’s NOT HOW IT’S SUPPOSED TO BE USED, PEOPLE.

From the company’s site:

We have seen comments about goofballs wanting to snort it. Don’t do it! It is not a responsible or smart way to use the product. To take precautions against this action, we’ve added volume to the powder so it would take more than a half of a cup of powder to get the equivalent of one drink up your nose. You would feel a lot of pain for very little gain. Just use it the right way.
Palcohol, which is used by adding water to a powder packet, also seems to have been caught with its e-pants down because SB Nation, Gawker and other sites found verbiage used on the company’s now-changed homepage that seemed to advertise the product as a solution to the hassle of trying to sneak booze into venues.

“What’s worse than going to a concert, sporting event, etc. and having to pay $10, $15, $20 for a mixed drink with tax and tip. Are you kidding me?!” the text read. “Take Palcohol into the venue and enjoy a mixed drink for a fraction of the cost.”

A new preamble on the site’s homepage now states:

There was a page visible on this site where we were experimenting with some humorous and edgy verbiage about Palcohol. It was not meant to be our final presentation of Palcohol … Many media outlets copied some of that old verbiage about taking Palcohol into venues to avoid high drink prices. But what they didn’t include in their stories is that we mentioned on that same page, that you should check with the stadiums first to make sure they allow it.
At any rate, Gawker thinks this stuff could be dangerous:

It’s hard to imagine how or why the federal government signed off on Palcohol, a product that, in the wrong hands, could make the darkest days of the Four Loko era look tame.
But the company, which also says its product can be sprinkled on food (vodka eggs, anyone?) insists that, when used as directed, Palcohol has as much alcohol as a regular mix drink.