Planetary alignment with the Giza Pyramids, once in 2,737 yr 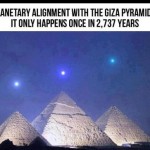 As long as we believe we are at the most advanced period of time we will not look for other answers. Shaman all over the world today know that in our normal state of consciousness we will not have a supernatural experience or even a spiritual experience. The supernatural is all around us, all the time, unseen and our senses cannot sense them. This is why it is wise to dissolve the ego mind in order to become in charge of your senses. Our education and the knowledge so called scientists share with us, for example; what is accepted as physical properties, dumb us down. Almost every day someone writes me to ask if what they are reading is true or false. The basic knowledge is missing and that makes discernment almost impossible. Knowledge is Power.

The Peace Band is Where we Find Zero Point

At the geodesic center of the world you will find pyramids clustering at six distinct sites; Abu Rowash, Giza, Abu Garab, Abusir, Saqqara and Dashour. There are 22 pyramids in the Band of Peace. These sites are connected. Today they are isolated sites or only partially excavated. The treasure of free energy is hidden from us today. We had superior science long ago. Each of these sites is built on an electrical ley line within Earth’s Energy Grid. Likewise, each of these is built upon an aquifer. A short camel ride from the Giza pyramid is Abu Garab with three pyramids and the largest Obelisk which ever existed on Earth. It was made completely of quartz crystal. The many quartz basins formed a water channel where energy was produced. These structures have hieroglyphic carvings on them in the traditional Sufi language which is still spoken today.

The water when the Sun’s beam hits it raises the energy up through the tunnels of water into the apex of the pyramid providing free energy. The core of the Pyramids are made out of Dolomite Limestone and has a high magnesium content which conducts electricity well. The sheaths covering the pyramids, just like an electrical wire, were made of Tura Limestone which is mostly calcium carbonate, a poor conductor of electricity. Within the Pyramid are granite tunnels and this is a transmission stone. The ancients made precise calculations connecting their lives on Earth to their lives in the Stars. The cluster of Pyramids at Abusir are exactly in alignment with the Pleiadian cluster. The Giza Pyramids align with Orion’s Belt. For seventy days each year the Sun of our Trinary Sun System, Sirius, falls out of sight in the nighttime sky. Along the Peace Band are Sun Temples built between Abusir and Giza where the Sun crosses the Milky Way in a procession over these seventy days each year. It is exactly precise built on the ground according to the Cosmic procession in the Sky. This is a passion play for our Solar System.